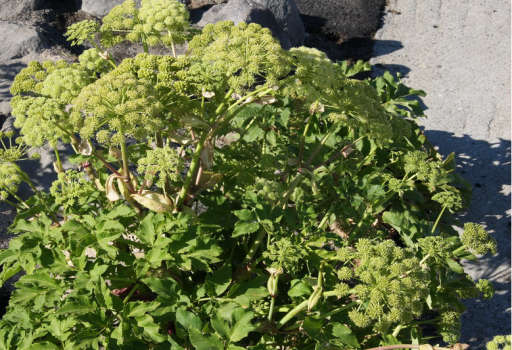 Angelica, or Angelica by its scientific name, is a biennial herb that grows between 1 and 2.5 meters. Angelica grows in areas of damp, mountainous regions in temperate climates. It’s native to Europe but is now found in areas of Canada and the United States. It features a hollow, branched purple-green stem with triangular leaves and clusters of flowers that feature a sweet aroma.1 The angelica fruits contain oval-shaped seeds. Angelica leafstalks are similar to celery and can be eaten raw or cooked. The entire herb, including an essential oil derived from it, is used in culinary practices, perfumes, alcoholic drinks, and medicine. Angelica is most often taken as a tincture or decoction.1

Angelica gets its name from the Medieval Latin term “ angelica,” which means “angelic herb” due to its properties that are believed to help cure poisoning and plague. It’s long been believed that the herb can help protect against infectious diseases like influenza. It may help with digestive issues such as gas, dyspepsia, and stomach pain. It’s also said to improve blood circulation and bronchitis symptoms.1

In addition, can be made into an essential oil derived from its roots and seeds.2 This essential oil can be used for relieving spasms, relaxing the body, and purifying the blood. It even acts as a diuretic and helps in treating nausea, flatulence, and high blood pressure.2 It may also help treat feverish symptoms, indigestion, heartburn, and colic.3,4,5 Other angelica benefits include for:

Angelica Side Effects and Precautions

Angelica side effects can include skin sensitivities that result in dermatitis. In fact, it’s known to cause photodermatitis in some people, which is a condition that results in an abnormal skin reaction when exposed to sunlight.6 In addition, angelica acts as a blood thinner and should not be taken if you’re taking other anticoagulant medications. Angelica is thought to affect the menstrual cycle and should not be taken by women who are pregnant or breastfeeding.1