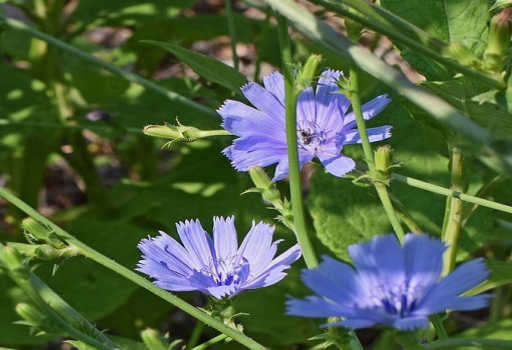 Chicory is a perennial herb that produces small blue flowers. It’s part of the Asteraceae/compositae family, which includes daisies and dandelions. Its botanical name is Cichorium intybus L. and is often referred to as chicory root. Different varieties of chicory are also cultivated for their green leaves, which resemble Belgian endive.1 2 The chicory plant has been cultivated since Ancient Egyptian times and is still cultivated throughout Europe and the Mediterranean. It also grows throughout the United States. Chicory has often been used as a coffee substitute, which was started in France during the 19th century. During World War II, chicory was used as a coffee replacement when coffee bean imports halted in the United States.2 3

Chicory benefits include containing high levels of polyphenols, which are a natural anti-inflammatory and antioxidant. Chicory can be helpful in preventing chronic disease caused by oxidative stress.2 Chicory root also contains a prebiotic fiber, which helps to promote healthy gut bacteria and is also believed to enhance calcium absorption.2 3 Chicory health benefits are also known as being part of the diabetic diet plan because of its natural content of adiponectin. This is a protein that regulates blood glucose levels and can help prevent the early onset of diabetes.2 Other chicory health benefits include:

Chicory uses include being a natural remedy for the following conditions:

Chicory Side Effects and Precautions

There are no known severe chicory side effects. Anyone with allergies to plant in the Asteraceae/compositae family should be cautious of taking chicory as it can cause allergic reactions.2 3