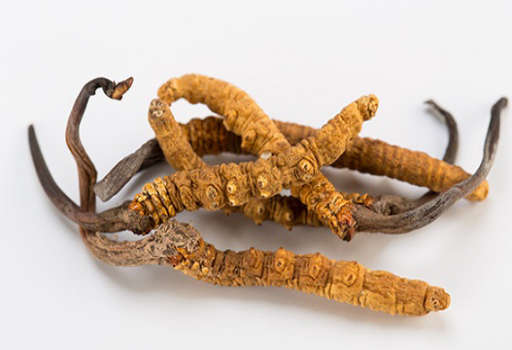 Cordyceps are often referred to as a type of mushroom. However, they’re classified as part of the Ascomycetes fungus family. Cordyceps, known by their botanical name of cordycep sinensis, are native to the Himalayan mountains. Cordyceps have been used as a superfood for 5,000 years in Traditional Chinese Medicine.1 Cordyceps are often referred to as “caterpillar mushroom” or “winter worm”. These names come from the fact that cordyceps are actually a parasitic fungus that attaches to host caterpillars in Tibet. When the caterpillar dies, the cordycep fungus begins to grow from the caterpillar's head. Today, most cordyceps are grown on soybeans or other hosts, instead of caterpillars.2 Ancient Tibetans knew of the cordyceps benefits as a medicinal remedy because of how their sheep would gain vitality and health whenever they consumed cordyceps.2

According to Tibetan and Chinese history, traditional healers used cordyceps benefits to treat 21 different ailments.3 For many reasons, cordyceps are considered a superfood and are becoming increasingly in high-demand. Cordyceps are known to have powerful antioxidant and anti-inflammatory properties, which can help combat chronic disease caused by oxidative stress.1 One of these known uses is cordyceps for adrenal fatigue, because of its energy-boosting properties. Cordyceps benefits for improved health include:1

Cordyceps uses include being a natural remedy for the following conditions:

Cordyceps Side Effects and Precautions

Cordyceps have limited side effects and are felt to be generally safe to use by most people. However, pregnant or breastfeeding women shouldn’t take cordyceps since its safety has not yet been fully studied.1