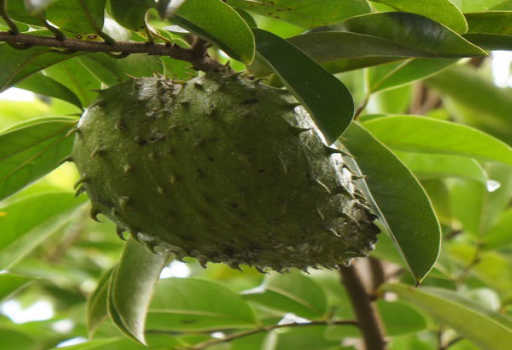 Graviola is a common food and drink that comes from the soursop tree found in the rainforests of South America, Southeast and Africa. Soursop trees are evergreen, growing no more than 10 meters high and produce a tasty fruit commonly known as . The scientific name for soursop trees is Annona muricata. They’re also called guanabana, cherimoya, custard apple and Brazilian paw paw.1,2,3

Graviola fruit is used for cooking and also as a traditional medicine in many warm climates. Occasionally, the leaves, and stems are also used therapeutically.  Ripe fruit has a yellowy-green color and is sheathed in a leathery, inedible skin. Sizes of fruit range up to 6.8 kilograms and appear everywhere from flat and bent to nearly round.1,3

The flesh from fruit can be eaten raw or is often cooked into pie fillings, and jellies. Juice from fruit is very sweet and tasty. It’s often added as a flavor to ice cream and nectar. Graviola is widely available on the world market in raw form as well as in capsules or dried products for medicinal purposes.2,3

The soursop plant’s leaves and fruit are rich in vitamins B1, B2, and the minerals magnesium, zinc, phosphorous, potassium and calcium. They’re also extremely rich in Coenzyme Q10 that helps fight inflammation and eliminate free radicals.5

Graviola health benefits have been long known to help reduce fever and cure digestive tract parasites. There is proof that uses are effective in treating rickets, regulating blood pressure and even relieving symptoms from the common cold.5

Studies indicate that health benefits may be effective in the fight against cancer. A 1976 study by the National Cancer Institute was astounding. It concluded that cancer treatment has a marked ability to eliminate cancerous cells and that it had an ingredient 10,000 times more potent than chemo.3,4,5

Graviola cancer treatments and uses could be effective for the following conditions:

Graviola Side Effects and Precautions

While there are minimal side effects, there is reason to suspect that may be harmful to people suffering from Parkinson’s disease when taken in large quantities.3,5

Graviola side effects may also occur when seeds from the fruit are eaten. These could potentially be poisonous to some people if taken in large amounts.1