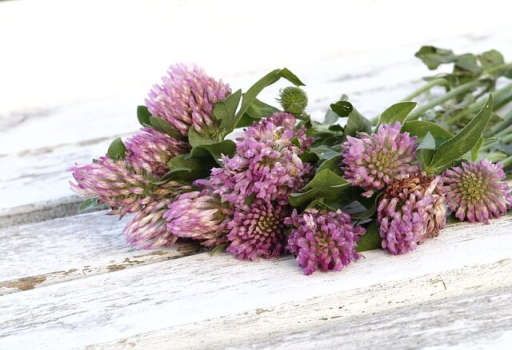 What is Red Clover?

Red clover is a plant in the legume family commonly used in herbal medicine.1 It grows in meadows throughout Europe, Asia, and North America, where animals like cattle graze on it.1 It’s also used as a rotation crop since it improves the quality of the soil.2 The clover’s flowers can be used for therapeutic purposes when dried.1 It’s available in tablet, capsule, tincture, tea, and extract forms.1 Red clover ointments are also made to treat conditions topically.1

Red clover has historically been used to treat respiratory problems like asthma and bronchitis, as well as skin issues like psoriasis.1,2 It’s also believed to purify the blood by acting as a diuretic as well as aid in cleansing the liver,1 and it’s said to have anti-cancer benefits.2 Red clover is rich in many nutrients like magnesium, niacin, calcium, phosphorus, thiamine, potassium, and vitamin C.1

Red clover benefits include that it contains chemicals called isoflavones.1 These chemicals have estrogen-like effects on the body, which may help treat symptoms of menopause, such as hot flashes.1 Other red clover uses include for:

Red Clover Side Effects and Precautions

Red clover side effects are minimal, and studies have shown that it can be used for up to a year without serious side effects.3 However, rare red clover side effects may include rash, headache, and nausea.1 Do not take red clover if you’ve been diagnosed with breast cancer.1 Red clover may interact with vitamin K supplements, which can decrease the blood-thinning effects of red clover.4 Avoid taking this herb with other blood thinners or other herbs that have blood-thinning effects.1 It can also interact with hormone-replacement drugs and tamoxifen.1 Talk to your doctor if you’re taking other medications or herbs.

Do not take red clover for more than three to six months at a time without consulting your physician.1 While red clover can be used to treat coughs in children, it should not be administered without talking to your care provider first.1 Don’t take red clover if you are pregnant or breastfeeding.1 Never use fermented red clover.2 More research is needed on the benefits and side effects of red clover, so it’s best to talk to your doctor before attempting to self-medicate.