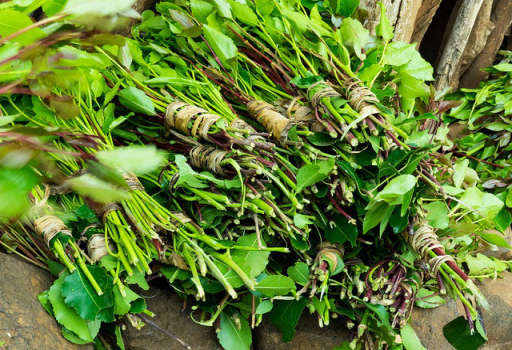 Khat is a type of plant leaf used for medicinal purposes known for its psychoactive properties. Khat leaves come from the Catha edulis plant. Catha edulis is a flowering evergreen tree or shrub that is native to Eastern Africa. It is believed to have originated in Ethiopia. The Catha edulis plant grows well at high elevations of 4,500 feet.1

Khat leaves resemble basil as they are small elliptical-shaped leaves. Naturally, leaves have a reddish-green color but turn yellowish when they dry out. Khat goes by several names and spellings depending on the language and culture. These other names include qat, and tschat.1

Traditionally, as leaves age they become more and more desirable. Khat leaves are often not harvested from the plant until they’re 4-6 years old. This allows more time for the organic compounds to strengthen in potency.1

Traditional khat uses have been to chew these leaves to have a stimulant effect on the Central Nervous System. The natural amphetamine properties in khat stimulate the pleasure center of the brain, which can have a positive effect on mood. In traditional applications, khat uses were for religious ceremonies but also to alleviate fatigue and hunger.1

Khat uses include treatment for the following:

Khat Side Effects and Precautions

Because it is a psychoactive, khat side effects can include a sense of crashing, and anxiety when the psychoactive effects wear off. Only take khat in controlled, small doses.1,2