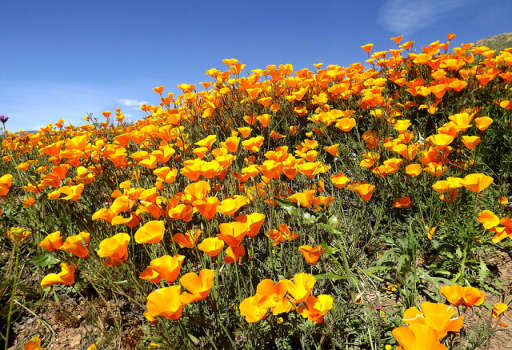 What is California Poppy?

California poppy, also known as Eschscholzia by its scientific name, is an herb that grows in the western parts of North America. It features single flowers with silky petals that can be red, orange, yellow, or pink. The small annual or perennial plant grows best in poor, sandy soil and in total sunlight. The flower has been the official state flower of California for over one hundred years.2 The dried aerial parts of the plant can be used in medicine.1

California poppy contains similar benefits to other plants in the poppy family. Its sap has sedative alkaloid compounds, which allows it to act as a painkiller. Traditionally, local Indians used the herb as a painkiller for toothaches and other medical issues. It was also used for treating headache, insomnia, and skin ulcers. California poppy can be mixed with olive oil and made into a hair tonic to promote thicker, shinier hair.1 In addition to these California poppy benefits, the herb is believed to help with the following conditions:

California Poppy Side Effects and Precautions

As with any herb, it’s best to proceed with caution if using a California poppy herbal remedy. Do not take more than the recommended doses. When preparing an infusion, use only one to two tablespoons of the dried herb in a cup of water.1 Avoid California poppy if you have known allergies to similar herbs, and proceed with caution if you are pregnant or breastfeeding. Talk to your doctor if you have a medical condition, and discuss any other herbs or medications you’re taking to avoid the risk of interactions.